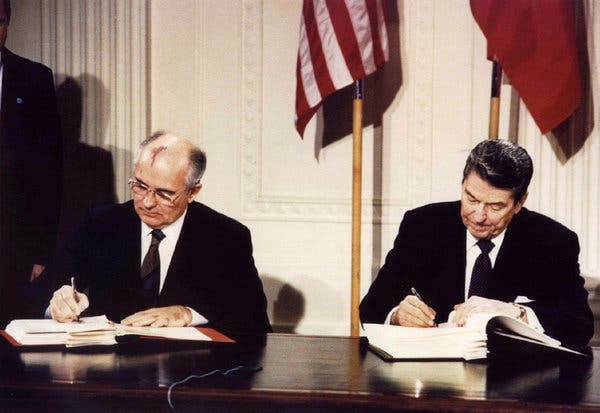 Soviet leader Mikhail Gorbachev and President Ronald Reagan in 1987 signing the INF Treaty at the White House. Source: The New York Times. “What Is the I.N.F. Treaty and Why Does It Matter?” February 1, 2019.

While a distressing decision, the suspension of the Intermediate-Range Nuclear Forces (INF) Treaty  was the right decision to make for U.S. national security interests.

The Trump administration’s decision last year to withdraw from the INF caused widespread debate and was seen by some as the loss of a historic stepping-stone in arms control. The signing of the INF on December 8, 1987 by former U.S. President Ronald Reagan and Soviet Premier Mikhail Gorbachev was celebrated as a crucial development in nuclear weapons arms control. With the removal of the Pershing II Weapon System and Ground Launched Cruise Missiles, the Soviet Union was willing to come to the negotiation table. The treaty entailed a ban on the production of ground-launched ballistic and cruise missiles with ranges of between 500 and 5,500 kilometers, or what are considered mid-range nuclear weapons. Ultimately, this led to 2,600 missiles being eliminated as a result of the treaty.

Now, after 32 years, the INF’s existence is history.

After early speculations about violations in 2014, the Obama administration attempted to convince Moscow to return to compliance through and“integrated strategy”with diplomatic pressures. In contrast, U.S. President Donald Trump threatenedon October 20, 2018 the withdrawal from the treaty after Russia’s continued violation. Secretary of State Mike Pompeo followed two months later by announcing a deadline of 60 daysfor Russia to comply with treaty obligations or the U.S. will be forced to suspend the INF Treaty. On February 2, 2019, the U.S. followed through with its previous threat and formally suspendedits obligations to the treaty.

Russian President Vladimir Putin continuously deniedall accusations of non-adherence and demanded information from the U.S. on the intelligence collection showing the violation. With the U.S. withdrawal, Russiaannouncedthat the building of the banned missiles is a consideration now.

But the international community should not lament the treaty’s end. It was inevitable because the treaty had its flaws to begin with.

Some of the major criticisms of the treaty were the exclusion of sea-launched missiles and other major nuclear powers such as China. Admiral Harry B. Harris highlightshow the U.S. put itself in a disadvantage as China built up a rocket force since it was not bound by the treaty. The treaty explicitly obligated Russia and the U.S. to refrain from the deployment of ground-launched intermediate range missiles, but it did not prohibit sea-launched missiles. Hence, both powers developed similar launch ranges from the sea regardless and continue to do so. That is also why the U.S. military continues to improve nuclear weaponry launched from submarines through partnerships with private corporations such as Huntington Ingalls Industries that builds a new generationof ballistic missile submarines and Lockheed Martin that provides new procurement of Trident IImissile production and deployed systems support.

In addition, China was able to develop an intermediate-range missile arsenal, as it was not bound to such treaty. China is not the only one modernizingits nuclear arsenal. India is recently testingnuclear submarines, and Pakistan is known to have been increasingits arsenal for decades. Not to mention the recent increased tensions between the South Asian nations after the Pulwama terrorist attackthat could cause further build up.

But numerous opponents have also expressedsome risks that can follow with U.S. withdrawal from the treaty. The withdrawal may depreciate achievements in arms control and the validity of international treaties. But what signal does it send if the treaty would have been kept in place even if actors don’t comply? If members can violate a treaty without consequences then incentives to join an international arms control treaty might be higher, but these new members states might also be more prone to violate the agreement.

William Perry, former U.S. Secretary of Defense, activistin reducing nuclear dangers, and member of the Pentagon’s high-level Defense Policy Board statedthat giving up on the INF is like “giving up on treaties.” According to him, not only a cornerstone arms control treatywill disappear, but it also sends the message that international efforts and treaties are not robust and therefore, more likely to be broken and abandoned. This comes in addition to difficult collective efforts, such as the nuclear states’ refusal to sign the 2018 Treaty on the Prohibition of Nuclear Weapons(with only 19 ratifications) – an effort to eliminate all warheads. This treaty came as response to the Non-Proliferation Treaty’s struggle to enforce its disarmament clause. The INF withdrawal signaled that the U.S. is not willing to accept continued violations to agreements. Instead of trying to fix something broken, a new start may be preferable.

The end of the treaty sparked some fearsof another nuclear arms race between the U.S. and Russia as it was seen during the Cold War. Mid-range missiles are considered highly destabilizing because there is little warning and they can reach their targets within minutes. The critical question is whether the U.S. and Russia will be in a continued nuclear arms race regardless of the end of the INF.

There were some tactical and strategical implications of the treaty, but it hardly mattered for the capabilities of both countries’ massive nuclear stockpiles. Russia and the United States together possess over 90%of all existing nuclear weapons. President Putin had just announced last yearhis new nuclear cruise missiles. The Pentagon similarly announcedin its 2018 Nuclear Posture Review the modernization effort for all three legs of the Triad and the additional development of a new low-yield nuclear warhead (whose production has just started) to be placed on existing ballistic missile submarines. Furthermore, all large nuclear powers are racingto develop a hypervelocity glide vehiclethat are launched into space and then navigate autonomously following reentry to evade antimissile defenses. There is no doubt about ongoing arsenal modernization by the nuclear states. Unfortunately, the INF was hardly a true barricade in decelerating arms production.

Skeptics of the INF withdrawal cite the lack of attempts to hold diplomatic talks and bilateral meetings to save the treaty in advance. However, regardless of the theoretical discussion of a withdrawal from the treaty, Russia would likely neither halt its nuclear build-up nor abandon existing missiles. To convince Russia to give up its mid-range missiles was an unrealistic aspiration, and President Putin would have held on to the missiles regardless of any deadline given by the U.S.. The U.S. military will have to develop appropriate defense measurements. President Trump will have to convince Congress to approve more funding for mid-range missiles. With intermediate-range missiles potentially returning to the European theater, the U.S. and its allies must now start considering whether current defense measures meet the evolving threat.

The U.S. withdrawal from the INF was the acceptance of hard facts. The treaty is done and cannot be reversed. New efforts should be made to create a treaty that limits intermediate-range nuclear forces instead of banning them. U.S. national security benefits from the withdrawal because the barrier to build matching defense measurement against Russia and China is dissolved. While the Trump administration’s withdrawal is irreversible, the next steps should include diplomatic efforts to establish an agreement that(1) creates a ceiling for mid-range missiles, (2) limits the development of a new class of nuclear weapons, and (3) is collective to include other nuclear weapons states. The threat is no longer bipolar. States must address the multipolarity of the security environment, which ultimately leads to a need for multilateral nuclear arms control agreements. This line of thinking can be threaded through the New START (Strategic Arms Reduction Treaty).